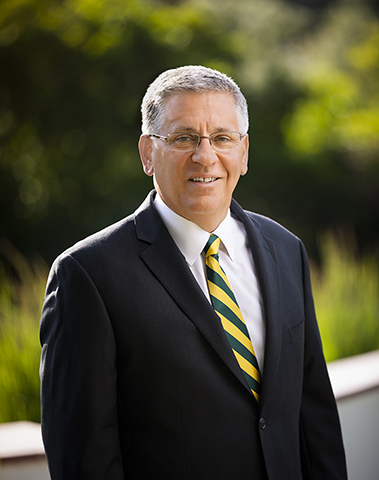 Dr. Armstrong brings to Cal Poly a blend of experience as an honored teacher, respected researcher, and experienced administrator. At Cal Poly, he has focused on ways to improve graduation rates. To further bolster student success, he has sought to expand university-industry partnerships to attract more applied research to the campus, thus increasing professional development experiences for faculty in order to enrich classroom instruction.

As a first-generation college graduate, Dr. Armstrong is particularly passionate about nurturing a campus climate that embraces inclusion and diversity. "To succeed in our increasingly multicultural society," Dr. Armstrong says, "our students need to experience the world as it really is."

Dr. Armstrong also served from 2011 to 2015 on the board of Aware Awake Alive, a national alcohol-awareness program created to educate young people on the symptoms of alcohol poisoning, create awareness on the conditions that enable it, and encourage responsibility for one another in situations where alcohol is consumed.

He participates in numerous California State University (CSU) committees, including the CSU Agricultural Advisory Committee, CSU Agricultural Research Initiative, CSU Water Resources and Policy Initiatives, CSU Technology Steering Committee, and CSU Council on Ocean Affairs, Science & Technology (COAST). Dr. Armstrong also is one of two CSU representatives on the Board of Directors of the California Council on Science and Technology.

As a faculty member at NCSU, Armstrong was known for engaging students in the classroom and was awarded numerous honors for his teaching excellence. He also was named Alumni Distinguished Professor for Undergraduate Teaching.

A recognized leader in nutrition and reproduction in large food animals, Dr. Armstrong has helped raise more than $9 million in grants and cooperative agreements to support research on social responsibility in the food chain. He has written or contributed to more than 45 scientific journal articles.

Over his career, he has served as chairman of the United Egg Producers Animal Welfare Advisory Committee and advised McDonald's Corp. on animal welfare and broader issues related to corporate social responsibility. He served as chairman of the Michigan Board of Agriculture Assembly Farm Bill Committee and, in 2009, contributed to significant changes in Congress' farm legislation. Dr. Armstrong also served on the U.S. Department of Agriculture's Agricultural Research, Extension, Education and Economics Advisory Committee and the Federal Reserve Bank of Chicago Seventh District Advisory Council.

Raised on a beef cattle, swine, and tobacco farm in Western Kentucky, Armstrong attended Murray State University, where he earned a bachelor's degree in agriculture in 1981. He earned both a master's (1984) and doctorate (1986) in physiology from North Carolina State University.

Jeff and his wife, Sharon, have two children who currently reside in Michigan. Their son Zack is a financial advisor; and their daughter Jessica is a physician in obstetrics and gynecology - married to Dean Gibbie, who is a realtor. Jessica and Dean are parents to the Armstrongs’ two grandchildren – Colton and Carter.